Today, I'm happy to host Ey Wade,  a prolific author who writes both fiction and non-fiction. Ey released two books on Father's Day. Both tackle subjects that aren't seen too often in fiction. 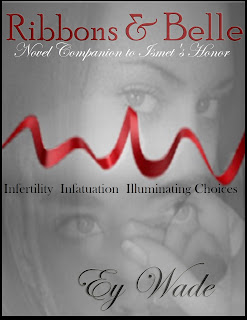 Gorgeous, dedicated fertility counselor Tyson Ribbons, has admired and loved embryologist, Anabelle “Belle” Lee for along time. When she comes in for counseling he fights everything within him not to deter her from her plans. Doesn’t stop his heart from wishing it could be him fulfilling her desire.

Anabelle Lee, mourning her inability to have a child of her own-suffered through two miscarriages, a heartbreaking late-term abortion, and a soul crushing divorce. As an embryologist, she has protected the potential life of many frozen specimens, and lived envious of the women choosing InVitro fertilization as their form of reproduction.

After a bit of encouragement from her best friend, and counseling from the very perfect Dr. Ribbons, Anabelle takes steps to fulfill her desire to become a mother. Problem is, the announcement brings more of a shock than a gift. 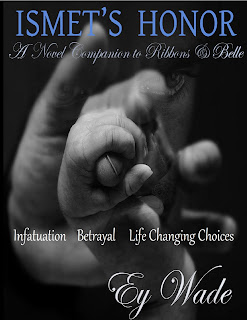 Sunny Verdi Reyes, has always wanted the “good-life.” Husband, home, lot’s of children. After cheering on her best friend and fellow embryologist Belle, through her successful quest for her dream, she wanted those things even more.

Unfortunately, Sunny broke the heart of her fantasy years earlier and it would take more than wishful thinking to get him back.

At 17, unable to voice his opinion against an unwanted abortion, Ismet Honorable O’Neal ran from the girl who killed his dream of the perfect life and the white picket fence.

Now he spends his time aiding other men in being the voice in the lives of their children. Years later, he returns and Sunny is waiting. She’s going to need more than the love in her eyes to repair the fences.

“So, are you saying your plans will never include a man? A man who has no intentions of being a participant in an affair for friends benefiting off a burning desire? You have no time for a man who has a wish to have a lasting relationship”

“Honesty, I hadn’t figured a literal man in the picture at all. My mind is to do what I need to do to be happy and fulfill my goals.”

“A literal man? What does that mean? What are your goals? What do you have planned in your life that you are so sure I, a literal man, couldn’t be a part of?”

Belle stood, smoothed her shirt and tugged at the waistband of her pants- trying to gather her words before opening her mouth. Eventually, giving up. Crossing the room to the closet, she pulled out the Christmas gift bag.

From it she placed a couple of the fertility magazines in front of Tyson and stood back to observe his reaction. The look on his face transformed from burning curiosity into lip pursing illumination.

“Oh. I have this one in my office.” Leaning forward, he tapped the cover of one magazine before shifting back to his previous position. Arms, crossed over his body gave emphasis to the movement of his chest, and the stretched material of his shirt. Tyson sucked in a deep breath before letting it out slowly and clearing his throat. His glance never leaving her face.

“How soon do you plan on going through with the procedure?”

“As soon as possible. I would simply love to have a baby by Christmas.” Belle smiled softly. unaware of how wistful she looked.

“At this moment, you remind me of a child wishing on a star for a toy she covets. You know this isn’t a game, right? This baby you want would be a living being. Not something you can return when it doesn’t meet your expectations.”

Belle’s smile vanished at the censor in his tone. Belle’s smile vanished at the censor in his tone. What the hell? I know he’s not about to try and lecture me. As if I need his advice. Humph, as if he knows me like that. Who does he think he is? Hands on her hips, she looked down at him leaning back with his body pressed into the material of her couch. That body making her all hot and bothered, like he belonged there. Searing his body from head to toe with a slit eyed glare, she stifled the urge to kick the underside of his shoe and order him out of her house.

“What are you trying to say, Tyson?”

“Hold on, wait a minute...” Tyson, stood. Hands held out in front of him as if he thought he had to protect himself from harm, a chuckle escaping.  “Damp down the fire. I’m just observing your reaction and emotions. Counseling in this area is my thing, remember?”

“Well this is no different than what I would ask any potential parent. Do you really want to be a parent? A single parent, even?”

Noticing the tears forming in her eyes, Tyson moved closer, pulling Belle into his arms and close to his chest.

“You know, you don’t have to use the lab method. I promise you, it would be much more fun trying the old fashioned way. I’m just saying,” He laughed and held her tighter when she struggled to pull out of his embrace. “You have me here. Happy and willing at anytime. And if you want, anywhere.”

“Tyson, stop laughing at me.” Belle pushed a little harder and found herself free to move around the room. Happy yet bereft at being deprived of his warmth. ‘This is a serious matter for me.”

“Oh, believe me, I know it is. Once a woman has gone through the trouble of collecting magazines, and you seem to have a ton,” he tapped the decorative bag with the toe of his shoes. “The thought of being a parent, going through the procedure is a foregone conclusion. Yet, still I wonder.”

“So, you're into studying women, Ismet? Know a lot of them? Are you into any certain one?”

“Still blunt and as curious as ever aren't you, Belle?” Ismet laughed. Sitting and filling his plate from several dishes, passing each to Sunny so she could do the same. “Of course I've known a few. I don't have a steady or I wouldn't have come here alone, but to answer the obvious- I'm not searching for one.” His gaze landed briefly on Sunny's face before he stuffed a fork filled with food into his mouth.

“Humph, well if you know like I know, life is short. If you're still out there searching at your age, you're more than likely looking in the wrong direction. Sometimes, what you're searching for is right next to ...what?” Belle squealed and ducked at the not trying to be subtle, roll thrown in her direction. The swift, timely reaction of her husband's catch, saving her from getting hit square in the face. “Sunny, did you purposely throw bread at me?” The fork she pointed at Sunny jerked up and down.

“Of course I did.” The tight eyed look Sunny cast in Ismet's direction, a cross between irritation and a dare, froze his expression in mid laughter, for all of a millisecond, before he continued laughing heartily. With the swift turn of her head, she flicked her hair. The ends swung and hit him in the face. “Me, kicking you under the table didn't make you shut your mouth.”

“That's because you were kicking me.” Tyson laughed. Reaching over and placing the roll back on her plate. “You got a good aim though.”

“I'm so sorry Tyson. But then again, I blame you. You should've tapped your wife or something. Put some check in her tongue.”

Tyson's smile was huge and the wink he shared with Ismet, flowed with a conspiring air.
“I tried. Shortened the length of my finger with all of the poking I was doing.” He held up his pinkie finger. “Didn't make a bit of difference.”

When the laughter subsided, Ismet-  pointing his finger at Belle, responded to her statement.

“Actually Belle, I think you could be on to something. Tyson shared a bit of your story when we were in the nursery, earlier. It was excellent, congratulations all around. Two beautiful daughters and love to boot. I never imagine such luck in my life.

Truthfully, I'm not going to try. I had my suburban dream as a kid.” He turned his head towards Sunny. For a moment they stared into each other’s eyes, their history plainly seen, no explanations necessary. “And we all know what a nightmare that turned into.”

Author Bio:
Ey considers herself to be a caged in frustrated author of thought provoking, mind bending books in several genres. She is the mother of three adult daughters that were previously home-schooled and the drooling ‘Lovey' to a little boy. Ey was born in Texas and reared as an Army brat. There is the constant need to speak, writing and telling stories is the way she choose to socialize.

The inspiration to writing Ribbons and Belle came from the controversy of abortions and the vitriol in which the women are attacked. People tend to over look the fact there may be medical reasons. Ismet’s Honor was born after a beta reader finished Ribbons & Belle and wished there was a story about Sunny. I decided to make it more about the father and what his wishes may have entailed and how abortions also affect the father’s to be.

Go pick up your copy of each!

Don't be shy, I'd love to hear what you think.